Altair is a relative newcomer to the Python visualization space, but it's already quite popular and is actively being developed and improved. It was created by Jake Vanderplas in collaboration with the University of Washington's Interactive Data Lab and is actively maintained on Github.

Altair is a so-called "declarative statistical visualization library" for Python. It has a pretty simple structure and philosophy:

A quick word on data

Altair, like many other plotting libraries, works best if your data is in a Pandas DataFrame, in "tidy" (AKA "long") format. It does not necessarily need to be pre-aggregated. If your data is in "wide" format, you can use the melt() method to convert to tidy data.

Now let's plot each flower's petal width versus its height. 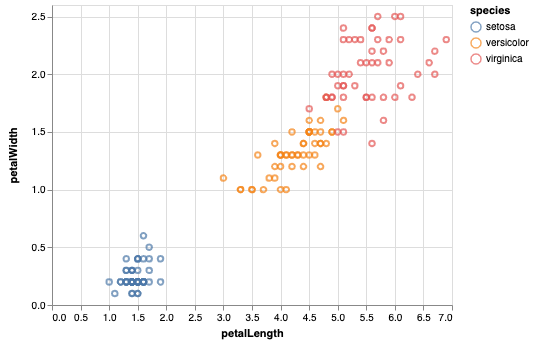 Voila! Let's take a step back though and do it step by step.

The first step creates an Altair chart object using the Chart class. You instantiate this with your data, here called df.

The next step is to tell Altair what type of chart you'd like it to render. Altair calls these "marks"; if you're familiar with ggplot's "geom" vocabulary, this is very similar. Below we call the chart method mark_point() to create our scatter plot. You can browse Altair's documentation for a list of all mark options.

Now we want to tell Altair how to map our data to the mark we've chosen. We do this using the encode() method, and x and y arguments. 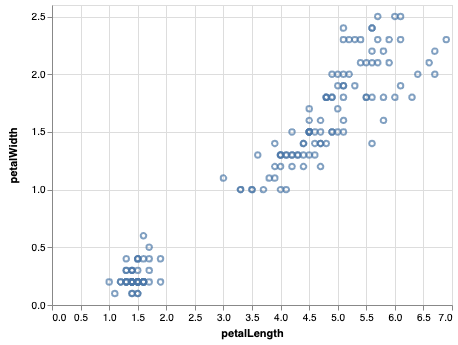 Easy and straightforward right? To make our plot slightly more interesting, let's see if there's a relationship between the species of the flower and the petal size. We do that by mapping that variable to another dimension, in this case, color.

And we're back to where we started. Simple, declarative plotting for Python and readily available to use in JupyterLab and Google's Colab Notebooks.

Here's a Colab Notebook with the code and output.