In this post we'll walk through creating stacked bar charts in several of Python's most popular plotting libraries, including Pandas, Matplotlib, Seaborn, Plotnine and Altair. Jump to the section of interest using the links below:

For all the examples, we'll be using the tips dataset that's included in Seaborn.

For some plotting libraries, it's much easier if we have data aggregated in a certain way. For Pandas, for instance, we want the x-axis variable as the DataFrame index and the stacking variable (gender in this case) we want as the DataFrame columns. So let's create that version of the data as well.

We'll first show how easy it is to create a stacked bar chart in pandas, as long as the data is in the right format (see how we created agg_tips above). 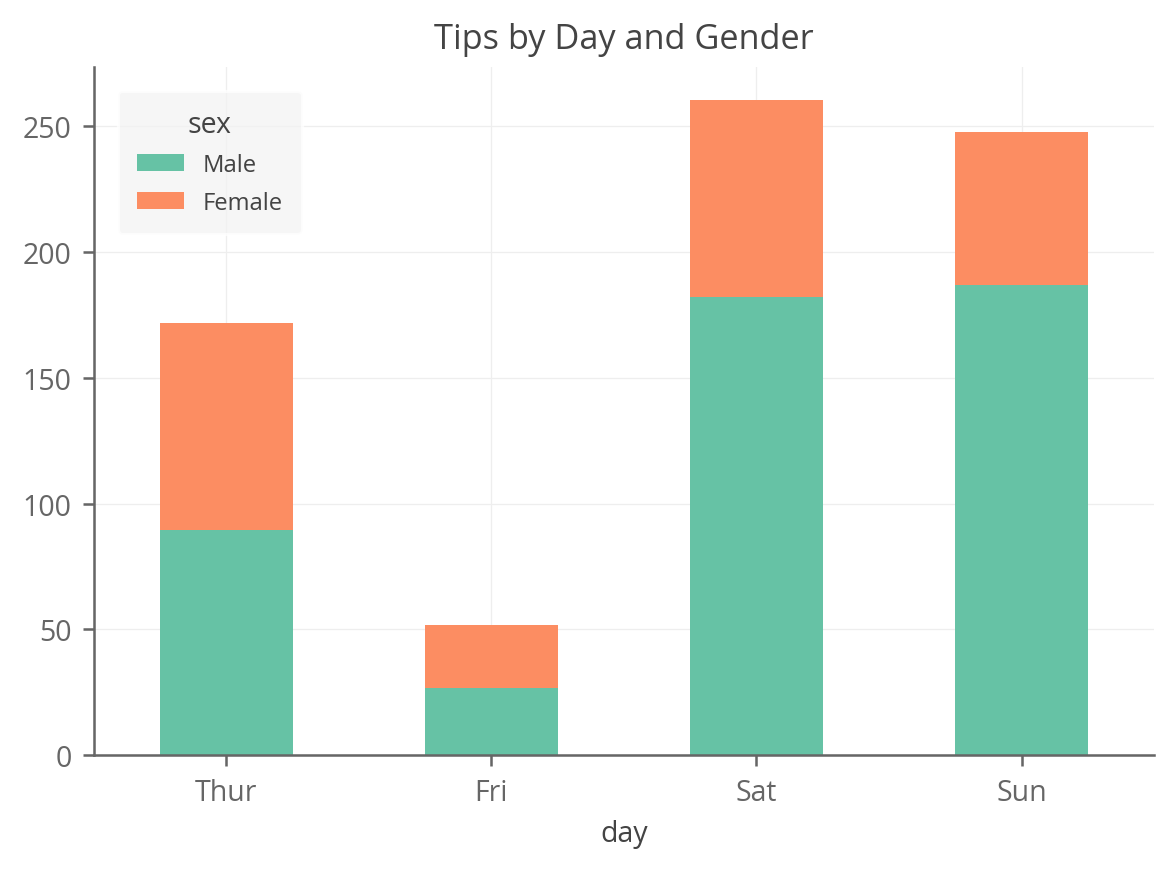 As you can see, if you have the data in the right format, creating a stacked bar chart in Pandas is extremely simple. And Pandas plot is just a wrapper around Matplotlib (as is Seaborn), so once the chart is created, you can edit it as you would any other Matplotlib chart.

For a more detailed version of this example, see the Stacked Bar Charts in Matplotlib post.

Now we can see what it looks like when we have to do this directly in Matplotlib, which takes a bit more work, but is explicit and flexible.

Really all we need to do is plot a set of bar charts for every "layer" in our stack. And for each layer, start the bottom of the bar at the top of the previous one. We do this using the aptly named bottom arg in the bar() method. 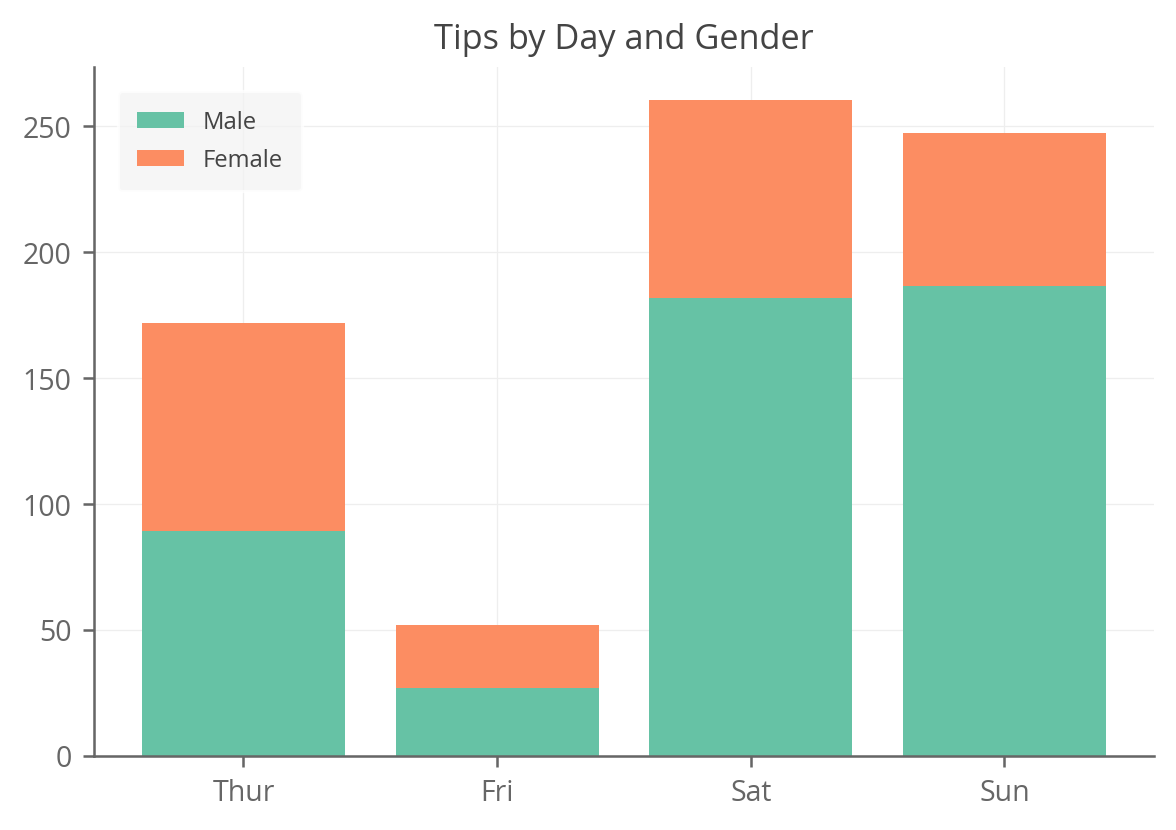 As you can see, the result is nearly identical to the pandas plot. While it has a few more lines of code, it's also more flexible. We used the agg_tips dataframe, but the data could have been in other formats and we could have done this just as easily.

What if instead of stacking two layers, you're stacking a dozen? You can just use a for loop and continually increment bottom like this:

That gives the exact same output as above but is more flexible, DRY and reusable.

Next we'll look at Seaborn, a wrapper library around Matplotlib that often makes plotting in python much less verbose. In this case, surprisingly, Seaborn fails to deliver a nice and purposeful stacked bar chart solution (as far as I can tell at leaset). Their recommended approach is not very intuitive and I much prefer the pandas or raw Matplotlib version.

That being said, it's possible to actually do this very succintly using Seaborn's hist() method for histograms. The trick is to just use the weight parameter to give the "counts" their true value. 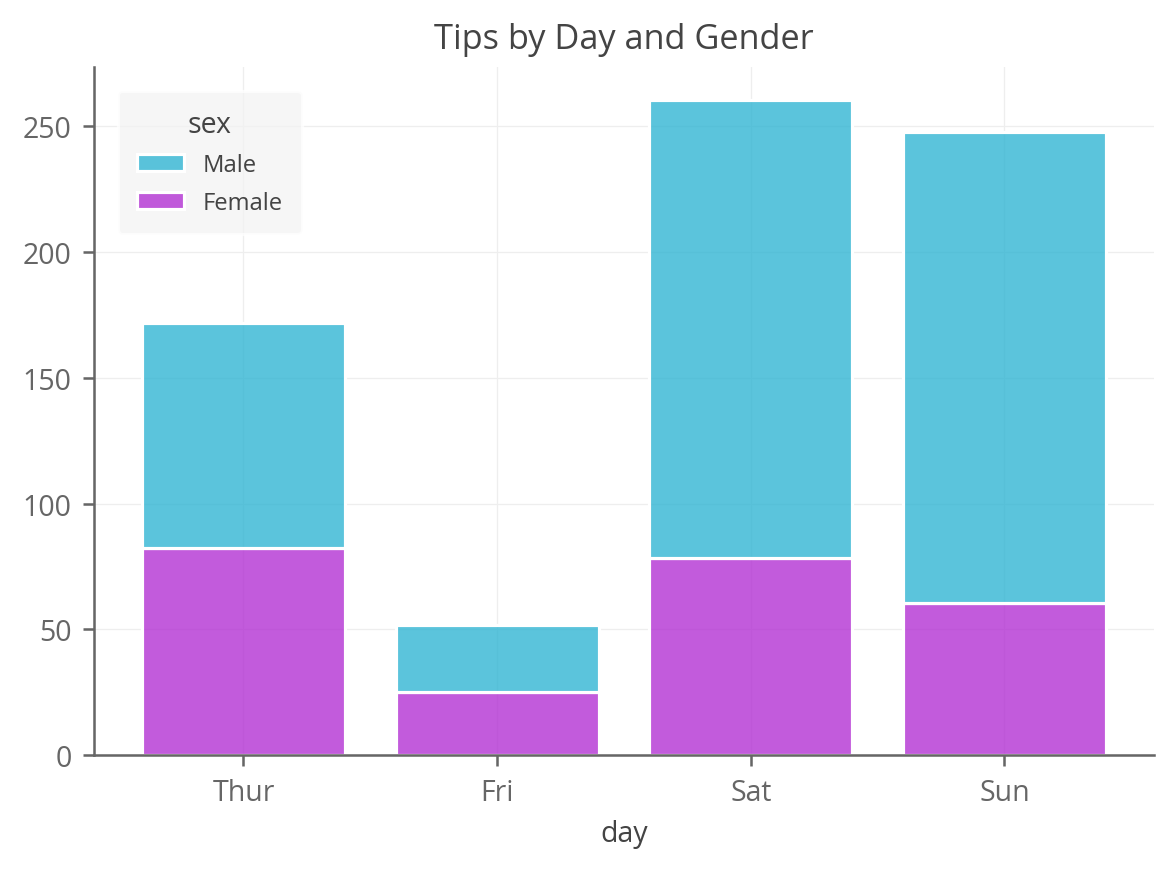 Pretty cool and succint right? It also uses the raw data so no data transformation is needed. A bit hacky though, so maybe best to use another approach until Seaborn provides something better out of the box.

Plotnine, a near clone of R's fantastic ggplot2 library, makes this pretty easy if you're familiar with the ggplot2 syntax. 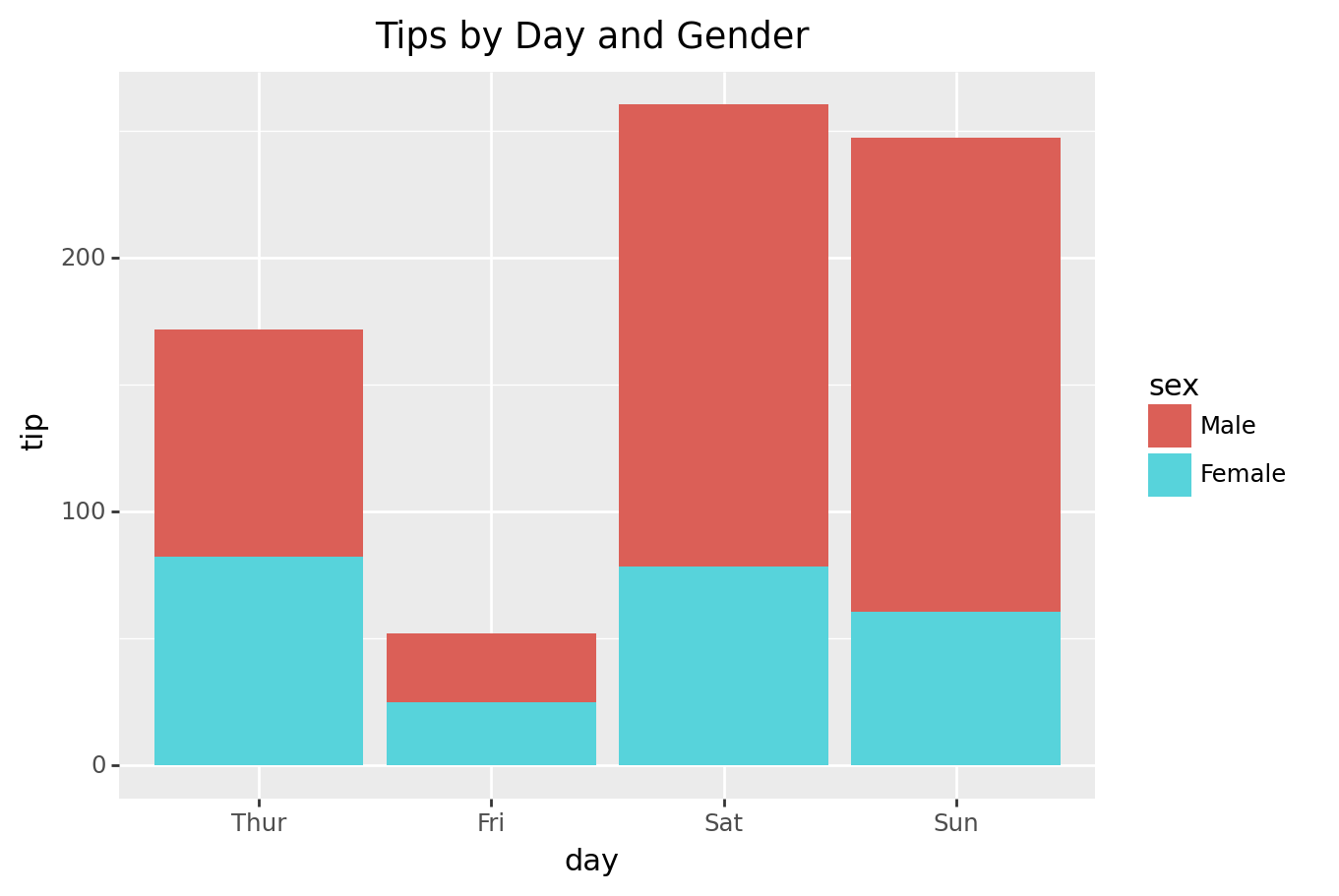 Lastly, we create the stacked bar plot using Altair, which is somewhat similar to plotnine in terms of data structure expectations and methods. 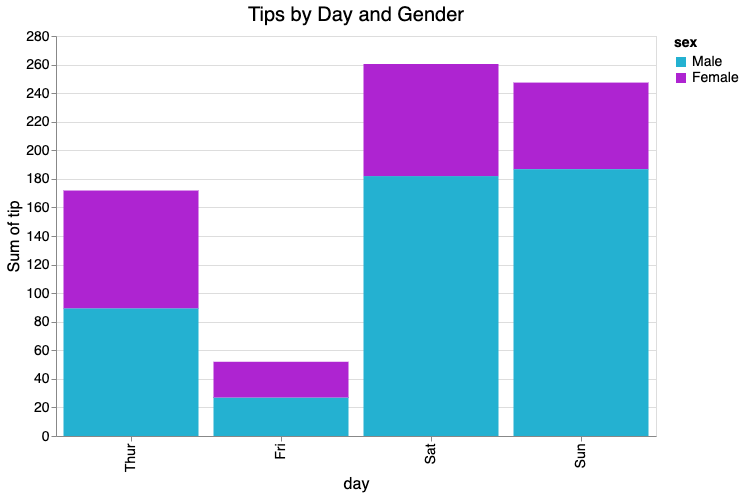 So who wins? In my opinion, if you're comfortable with some slight data wrangling, it's Pandas. It's short, simple, and gives you the flexibility of editing and finalizing the plot with Matplotlib if needed.

Hope this was helpful. Also make sure to check out our deeper dive into creating and styling stacked bar charts in Matplotlib.